In their own words

Raising a loved one with special needs isn’t easy. Being part of a supportive faith community helps!

RVRN is blessed to share these stories and expressions of gratitude with you. Told in the words of our constituents and supporters, they convey the impact and benefits of our mission better than we could ourselves.

Letting God be the perfect Parent

Seeing what is really going on

Conversation with Kit Kurtz and her daughter, Roya Sabri

On a late-summer morning, as birds sang in the lush, surrounding trees in Kona, Hawaii, Kit Kurtz and daughter Roya Sabri shared insights about life with their beloved son and brother, Dara, as they face down the label of developmental special needs.

“Sometimes we’re presented a material picture that seems less than perfect. And what we’re always doing is seeing what’s really going on,” says Kit, who actively supports Dara, a young adult, in spreading his wings. Dara swims a mile every week on open ocean and loves music. And he participates in Special Olympics, paddling Hawaiian canoes, playing bocce ball, and power lifting. He has even joined his branch church as a member.

Their family is a blend of different cultures. Kit’s husband (who passed away several years ago) was from Iran. The family moved to Hawaii almost two decades ago to help care for Kit’s mother, whose roots in Hawaii go back a century. Dara’s name is Persian and means “wealthy.” “He’s wealthy in so many good qualities,” observes his mom.

When Dara, who is not very verbal, indicated to his mother that he would like to join his church, Kit looked at what Dara was already contributing with his dedication, joyful singing, and love of the Bible Lesson. She talked with the members about qualities they saw in Dara. The members knew that Dara “loves to listen to the Lesson and hymns” daily, says Kit. “His prayers are loud and full of life!

In a sense, the church recognized even if this individual is not talking to them about Christian Science, this is a Christian Scientist, and he understands God. It was as much Dara becoming a member of church as the church embracing him,” she says. “Dara loves church,” adds sister Roya. “He understands the holiness of it.” Dara brings qualities of gentleness, joy, quietude, and obedience to his role as assistant Sunday School teacher in Roya’s class, she says.

Dara is already pure and perfect

A few years ago, the three traveled on an expedition cruise to Alaska. While it was a wonderful trip, there were times Dara grew visibly frustrated when the need arose to transition to new activities. After one particularly challenging moment, Roya was in tears. “I felt like I couldn’t do anything to help. I knew Dara wasn’t happy, but it wasn’t his fault,” she says. After the cruise ended, the family visited a nearby town. One day before departing on a hike, Dara decided he didn’t want to go. Roya and her mother continued to pray for harmony and a sense of God’s love.

Feeling like she didn’t have any answers herself, Roya turned to God for direction. “Suddenly, I just felt this wave of patience come over me,” describes Roya. “It was as if God was saying, ‘You thought you were being patient before? This is real patience.’ I found myself praying with the idea that God was loving Dara right there. And I felt compassion for Dara instead of pressure to move forward. I told Dara that God wouldn’t put him in a situation that was uncomfortable for him.

As I said that, I realized that the same was true for myself. After a few moments of tender listening on both sides, the mesmerism broke. We both moved forward, holding hands, laughing, and sharing jokes.” It was during that time that the family also found a new way of praying together that they still use today.

Kit experienced a fundamental turning point in parenting Dara when he was on a Hawaiian canoe paddling team, and the coach told her that Dara wasn’t trying hard enough. Dara was given until the following practice to improve or be cut from the team. On the way home, Kit prayed to be guided by divine Mind. She knew that Dara was doing his best. She wanted to explain this to the coach—and even wished she could make Dara a better paddler.

At that moment, a clear and loud voice came to Kit’s thought: “Hands off. He’s my child!” With this loving rebuke from God, she let go of her personal sense regarding Dara’s wellbeing. Nothing further was mentioned about Dara “not trying” at paddling practice. Kit says she now feels more able to let God be the perfect parent.

“The world often views people with disabilities as though they have to become someone else,” Roya reflects. “One precious glimpse of the truth I’ve had recently is that Dara is already who he is meant to be. The best way I can help Dara is by opening my own eyes and seeing him as the reflection of God—the expression of God who is already pure and perfect.”

Kit’s family first connected with Rainbow Valley Resource Network (RVRN) almost a year ago, when Dara joined RVRN’s first online program; and Kit and Roya now participate in the Family Support Network. Kit says, “You can trust with this group that they are tuned in to see God’s child—and you feel that.”

Kit, Dara, and Roya on an Alaskan expedition cruise. 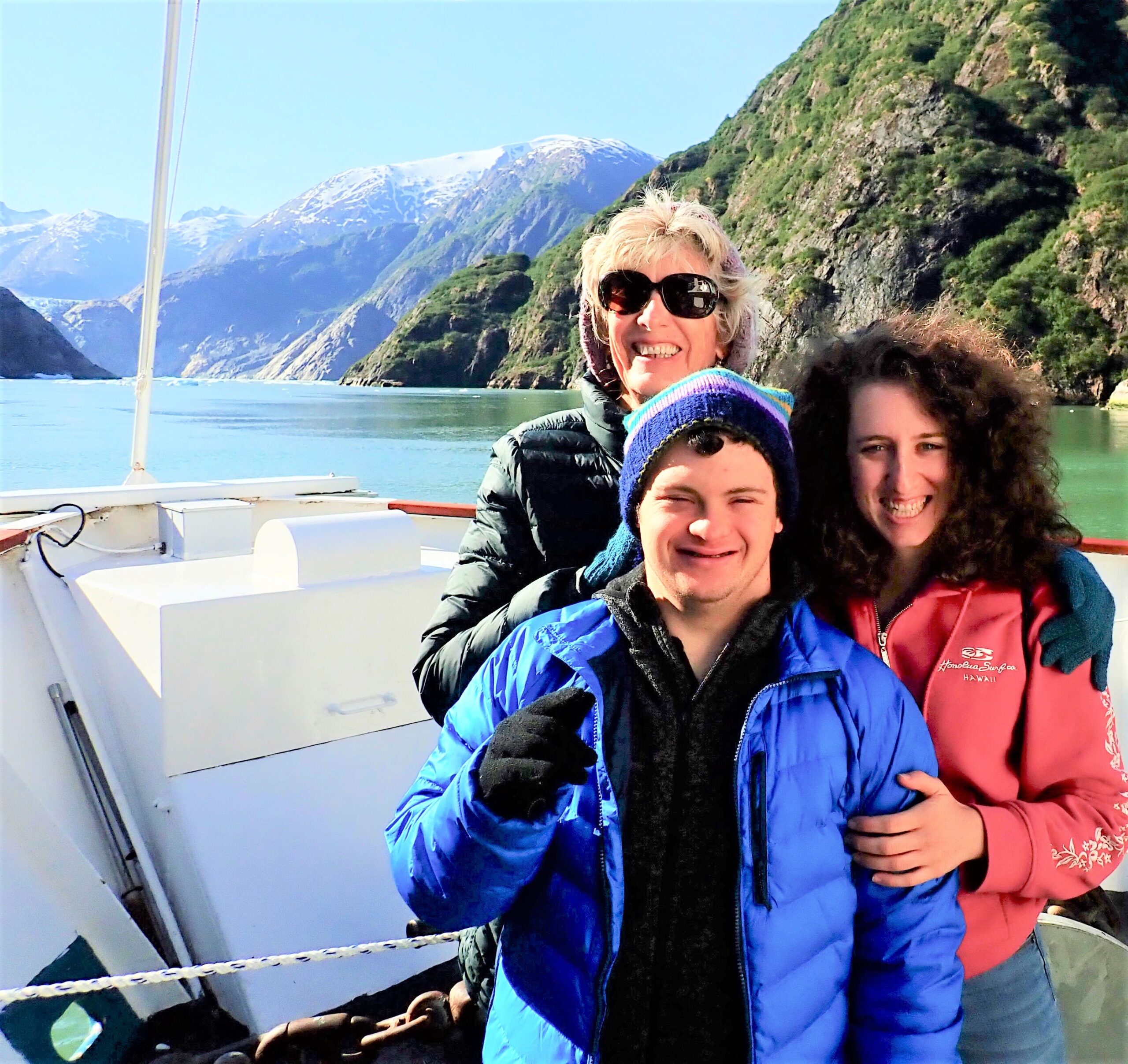